"Restorative Justice Healed My Heart": A Testimony from the Son of a Murder Victim

In 1991, I was living a painful life as a victim of violent crime.

My mother, Pilar, 52, was strangled to death in her home by workers she had paid to renovate the house. The killers were from Honduras. After stealing some items, they forced my mother to sign several business checks, then killed her and fled the U.S. without being held accountable for her death. My family was left to live a nightmare.

At the time, I reported on the court system for the Port Arthur News. Covering a similar case led me to conclude that I’d had enough. I found another non-crime reporting job at a nearby newspaper. I was living life as though the crime had not affected me. At my new job, I was smiling and outgoing. At home, I withdrew from my wife and one-year-old daughter and slept a lot.

After a few years, I sought help for depression. I improved, but still felt empty inside. I began working with crime victims at a candlelight vigil. Soon, I was asked to share my story at the event with crime victim John Sage, who started a restorative justice program called Bridges To Life. I had never heard of the concept before.

After giving my testimony — crying through most of it — a volunteer coordinator from Bridges To Life asked me to join the program. I declined, but gave her my phone number. After many calls, I decided to try it.

In 2000, I entered the Richard P. LeBlanc Unit, a pre-release correctional facility in Beaumont, Texas, and joined a small group in Bridges To Life. During the first week, we were asked to describe what we hoped to get out of the program.

After listening to the others, when my turn arrived I said, “I hope that I can keep someone from going through what I have been through.”

During the sessions the importance of confidentiality was emphasized to us because it enabled the offenders to grow and learn more about themselves.

One day during group I shared, “I don’t know why I’m here.” An inmate answered, “You are here because you don’t want anyone to go through what you’ve been through.”

His words immediately soothed me. Within weeks, everyone opened up and shared their stories. Over the years, I learned I am not very different from the inmates. I, too, had made mistakes. I just wasn’t caught. I knew that I could have ended up in prison too. In time, I learned that we are all children of God. All loved by Him equally.

We became very close, like a family. Many people shared things they had never spoken to another human being.

Restorative justice works. It heals both sides, changes hearts and minds, and creates fresh starts for victims and offenders alike. Years of experiencing restorative justice finally healed my heart! God can turn a tragedy into a blessing! 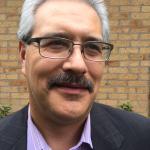 Chris Castillo is coordinator of chaplain volunteers with the Catholic Diocese of Beaumont and is a volunteer with Bridges to Life. Chris also served as the national outreach coordinator for Murder Victims’ Families for Reconciliation and is an active member of the Texas Coalition to Abolish the Death Penalty.