River of Fire: My Spiritual Journey, An Excerpt

Even when I’m a hundred years old, I’ll still be “too young to understand” the long-­standing assault on people of color in my own home state. But learning I am, scribbling furiously in my journal. Mostly I’m sitting at the feet of my new teachers, the residents in St. Thomas. Like Ms. Ruby, seventy-­five years old, who has just come to the Adult Learning Center to learn to read the Bible before she dies. As a child she worked in the fields, birthed a bunch of babies, and raised children and grandchildren, with nieces and nephews along the way, never “gettin’ round to book learnin’ ” face-­to-­face. She always did want to know about Moses, she says, and before she dies, she wants to read God’s word with her very own old eyes.

One day, Kathleen and I happen to be on the porch at Hope House and watch a scene unfold between Bobby Leonard and two policemen. Bobby, black and over six feet tall, did time in federal prison for bank robbery but was lucky to land in prison in Atlanta, which collaborated with local colleges to offer degree courses. Unable to read when he was tried and convicted, now with a college degree under his belt, Bobby is fiercely investing his every waking moment to cajole, persuade, or wrangle kids to stay in school. Having just finished talking to our students at the Adult Learning Center, he’s nailing a notice on a tree about a meeting for families with loved ones in prison. Suddenly, two policemen drive up and start arguing with him. Kathleen and I watch everything.

First, a loud argument, and then the police handcuff Bobby’s hands behind his back and push him against the police car, and he’s yelling to us, “Sisters, y’all are my witness, I got no drugs on me, they gonna try to plant ’em in my pocket, I got no drugs.” And off they drive with Bobby in the backseat.

Kathleen and I look at each other. I follow her lead. She’s already grabbing the car keys. We arrive at Central Lockup and Kathleen asks (demands, really; she’s made of strong German stock) to see the officer in charge. Poor Bobby. Here he is, a strong, smart black man having to rely on two white women to intercede for him. He accepts our help and later thanks us. He well knew what would have awaited him at Central Lockup. He’d be searched, the drugs “found” in his pocket, and he’d be charged for possession and maybe intent to distribute. An impossibly high bond would be set, and he’d be thrown in jail to await trial. Which may not have happened for a year or two or even three.

Somewhere along the line, a public defender, shouldering an impossible load of a hundred cases and horribly underpaid, would be assigned to defend him. And it may well be that Bobby would not lay eyes on his defender until the very day of his trial. In all probability there would be no trial at all. In 95 percent of criminal cases, justice is served up bargain-­basement style by plea bargains struck between prosecutors and defense lawyers. If your lawyer urges you to take a deal of fifteen to twenty years—­saying it’s the best the prosecutor is offering—­and you say “But I’m innocent,” no matter. Here we have the corrupt mess in our justice system in which innocent and guilty alike—­overwhelmingly black people and always poor—­are thrown into our state prison, Angola, for impossibly long sentences, never to be heard of again. Trouble, trouble, trouble. Poor people have nothing but.

To be sure, policemen on the St. Thomas beat have more than their share of trouble, too. Called to scene after scene of human carnage, including little kids killed in drive-­by shootings—­like three-­year-­old Kevin, shot to death while sitting next to his mama on the living room couch—­and often in confrontations with fleeing armed suspects, their own lives on the line, how can police possibly not be inured to trauma and its crippling consequences?

I’m taking a fresh look at the American Dream and who gets to live it and who doesn’t. 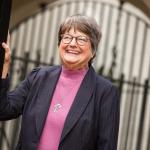 Sister Helen Prejean has been instrumental in sparking national dialogue on the death penalty and helping to shape the Catholic Church’s newly vigorous opposition to state executions.  She travels around the world giving talks about her ministry.  She considers herself a southern storyteller.

Sister Helen is a member of the Congregation of St. Joseph.  She spent her first years with the Sisters teaching religion to junior high school students.  Realizing that being on the side of poor people is an essential part of the Gospel she moved into the St. Thomas Housing Project in New Orleans and began working at Hope House from 1981 – 1984.

During this time, she was asked to correspond with a death row inmate Patrick Sonnier at Angola.  She agreed and became his spiritual adviser.  After witnessing his execution, she wrote a book about the experience.  The result was Dead Man Walking: An Eyewitness Account of the Death Penalty in the United States.  It became a movie, an opera and a play for high schools and colleges.

Since 1984, Sister Helen has divided her time between educating citizens about the death penalty and counseling individual death row prisoners.  She has accompanied six men to their deaths.  In doing so, she began to suspect that some of those executed were not guilty.  This realization inspired her second book, The Death of Innocents: An Eyewitness Account of Wrongful Executions, which was released by Random House in December of 2004.