A Table Where All Are Welcome: A Reflection for the Fourth Sunday of Lent

"It’s a question worth praying with: Who is on my disinvited guest list?"

"The Pharisees and scribes began to complain, saying, ‘This man welcomes sinners and eats with them.’"

When I read this line from today’s Gospel, my initial response was snark.

“What a scandal!” I thought. “Jesus ate with sinners? Of course he did. That was his entire ministry. What fools, those Pharisees and scribes!”

It brought me back to a time when a man complained about how his wife had invited someone to Thanksgiving whose lifestyle he disagreed with. He told me how he was going to ask his wife to disinvite the guest because he did not want to give others the impression that he approved of the guest’s lifestyle. She was a sinner, and he was a principled, church-going man, after all.

Then came the dreadful words that make every priest cringe, “Don’t you agree, Father?”

Like any good Jesuit, I dodged the question and answered it with a question. “Before disinviting the guest,” I said, “can you pray and imagine who Jesus would invite to his Thanksgiving?”

It was utter grace. I never come up with responses like that on my own. And yet, it wasn’t only a question for him — it was also for me.

If I’m honest, I have my own disinvited guest list, and I can recall it faster than the invited one. There are people who I judge as lost causes, not worth my time.

Mostly, these are people with whom I disagree, people who do not think or see the world as I do. Overall, I would consider myself a merciful person. But I do have my list.

It’s a question worth praying with: Who is on my disinvited guest list?

Jesus didn’t have a disinvited guest list. Everyone was welcomed. No matter what, everybody had a seat at the table. And it rubbed people the wrong way — in fact, it’s what got him killed. Understandably, they didn’t understand. How could such a principled, temple-going man eat with sinners?

The whole point of today’s parable, the Prodigal Son, is that when it comes to the loving tender mercy of God, we’ll never understand. It’s beyond our imaginations. They simply aren’t big enough.

All of us — not just some of us — need to expand the guest list. Lent is the perfect season to do so. That way, when Easter arrives, we can throw open the doors and let everyone in to celebrate.

It’s God’s vision of the kingdom: a full table, with plenty to eat, and no disinvited guest list. 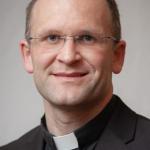 Fr. Travis Russell, SJ is the criminal justice policy advisor for the Jesuit Conference Office of Justice and Ecology. He has worked with Jesuit refugee Service in Malawi, taught at Verbum Dei High School, and served as an assistant at L’Arche Seattle.