We Won in New Hampshire. Now, We Keep Moving Forward.

Everyone in the abolition movement has their own story. Here's mine.

In 1982, I graduated from college and decided to follow my dreams. I left my native New England and accepted an engineering job in Southern California. With a regular work schedule and some free time on my hands, I realized that it was time to broaden my horizons and join others who were trying to make the world a better place.

During college, my father had introduced me to Amnesty International. I didn't know much about human rights, but I believed deep in my heart that torture is the most evil of human practices. I also knew that Amnesty International had been very successful in combating torture around the world.

I called the regional office in Los Angeles and joined a local Amnesty group near my home in Orange County. We met monthly and wrote letters on behalf of prisoners in countries that I'd never heard of.

During this time, I learned about Amnesty's position on the death penalty, which didn't agree with my own. I had considered capital punishment to be a rational response for particularly heinous crimes. For that reason, I never really engaged in conversation about abolition with my Amnesty friends.

I did, however, wrestle about this in my conscience. Within about a year, I concluded that only God could know whether someone should die for a crime, and since we can't know His will for certain, we must err on the side of caution. I was an abolitionist.

By 2000, I was testifying for Amnesty before the state legislature, supporting an abolition bill sponsored by Rep. Renny Cushing of Hampton. An off-duty Hampton police officer had killed Renny's father in 1988, an experience which strengthened his resolve to end the death penalty in his home state. After winning in both houses, we lost by governor's veto.

Twenty-five years after I joined Amnesty, the organization decided to include abortion rights in its mandate. I respectfully parted ways and continued my abolition efforts with the Catholic Church.

Somewhere along the way, I felt the call to become a deacon. During formation and after ordination, I saw firsthand what a powerful witness our church had become in the New Hampshire state house. Our director of public policy and future Chancellor, Meredith Cook, made this happen. (Ask anyone who knows.) And remember, New Hampshire ranks among the lowest in the country for religious participation!

After more defeats in the legislature and another veto, we repealed our death penalty this year on Ascension Thursday. During the Senate's override vote, I, now a deacon, was in my monthly counseling session at Catholic Charities. When I turned my phone back on, my wife Andrea had texted, "You won!" I had expected to win and felt no adrenaline rush. Almost immediately, I remembered the mantra of St. Junipero Serra, the Franciscan missionary to California, "Keep moving forward." Andrea had flowers and a beautiful card waiting for me at home.

Two days later, I arrived at our cathedral in Manchester for the ordination of two priests. As I approached the cathedral on the sidewalk, I spotted Meredith Cook. We locked eyes and embraced. I shook her hand, told her "well done," and continued walking to the cathedral. That's when the tears came.

That afternoon, I served as homilist for the anticipated Sunday Mass at our family's parish in Hampton, Renny Cushing's hometown. I felt privileged then, and again at two Masses the next day to publicly thank God and pay tribute to all who had played a part in repealing the death penalty in our state.

In the spirit of St. Junipero Serra, now I must move forward. California, here I come! 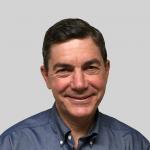 Deacon Steve Kaneb is a longtime death penalty abolitionist based in South Hampton, NH and a permanent deacon in the Catholic Church. He currently serves the parish community of Our Lady of the Miraculous Medal in Hampton. Deacon Steve is also a member of the CRS Foundation Board, as well as Catholic University’s Board of Trustees.