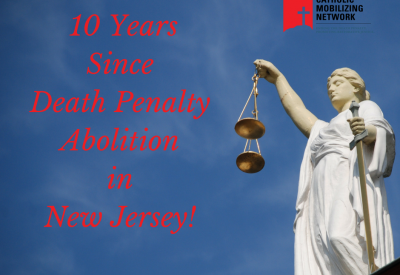 10 years ago on December 17, 2007, New Jersey was the first state in 40 years to abolish the death penalty. Read the statement below from New Jersey Bishops commemorating this important anniversary.

A Statement by the Catholic Bishops of New Jersey

Over many decades, the Catholic Bishops of New Jersey consistently called for the abolishment of the death penalty.  Thank God, on December 17, 2007, New Jersey became the first state in forty years to enact a law to eliminate the death penalty.  Groups across the globe hailed the enactment of New Jersey’s law as a victory for the dignity of life.  On December 19, 2007, the Colosseum in Rome glowed in New Jersey’s honor with the words “No Justice without Life.”

Our message is simple – every human being is made in the image and likeness of God, who alone is the absolute Lord of life from its beginning until its end (Genesis 1:26-28).  The death penalty diminishes us as a society.  We cannot teach respect for life by taking life.

We are not blind to the pain caused by crime.  We acknowledge that all murders are violent and shocking; stirring emotions of revulsion and anger.  We grieve for the victims.  We are committed to comforting, assisting and praying for the families and friends of victims.

We affirm the state’s duty to punish criminals, to prevent crime, and to assist victims.  We recognize the need to improve our criminal justice system and to forge a greater societal commitment to justice.  However, we believe that society has effective ways to protect itself and to redress injustice without resorting to the use of the death penalty.

Most Reverend Yousif B. Habash

Most Reverend Manuel A. Cruz, D.D.

"For some years now, I have expressed my concern that the death penalty is both cruel and unnecessary and I have called for its abolition. So, I welcome the changes to The Catechism of the Catholic Church on the death penalty and I am grateful for Pope Francis’ leadership in working for an end to judicial executions worldwide."

Following the publication of the revised section of the Catechism of the Catholic Church regarding the death penalty, Bishop Frank J. Dewane of Venice, Florida, Chairman of the USCCB's Committee on Domestic Justice and Human Development, welcomed the change and echoed the call to end the death penalty in the United States.