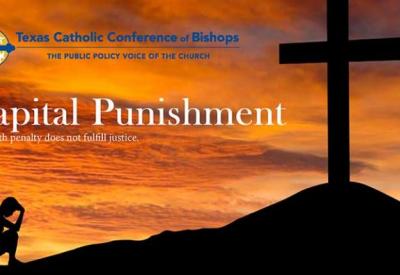 AUSTIN — The Texas Conference of Catholic Bishops has released a statement calling for the abolition of the death penalty, denouncing its effects not only on victims and others immediately affected, but also on society.

“Capital punishment vitiates our hearts’ capacity for mercy and love,” the bishops write, noting that “the death penalty not only does not correspond to the common good, it actually does great harm to it.” In their statement, the bishops cite several ways that harm is inflicted: 1) Capital punishment is used disproportionately on the poor, minorities, and people with mental disabilities; 2) Costs for capital punishment cases are three times that of a prisoner with life imprisonment; 3) The finality of death does not allow for rehabilitation or for consolation for victims’ families and 4) Studies have shown that innocent people have been executed by the state and that crime rates are not affected by a state’s use of the death penalty.

Instead, the bishops write, “The death penalty negatively influences our children’s moral formation and our culture as it fails to allow for mercy and redemption.”

“The Texas Catholic Conference of Bishops will also be working in the upcoming Texas legislative session to improve the rights of jurors serving in death penalty sentencing cases,” explained Executive Director Jennifer Carr Allmon. “Texas law is intentionally misleading as it requires judges and attorneys to lie to jurors about the level of unanimity required for a death sentence. While we will continue our efforts to end the use of the death penalty in Texas, this legislation will at least improve the fairness of the current system.”

The statement is being released on the World Day Against the Death Penalty (October 10) and at a time when Americans’ -- including Texans’--  support of the death penalty is declining. Fewer Texas juries are giving death sentences than at any time in the last two decades, and Texas' highest criminal court has granted an unusually high number of reprieves over the last two years due to concerns about the fairness and accuracy of death penalty convictions. This year, the state will see the lowest number of executions since 1996.

The statement also serves as the bishops’ annual address to Texas Catholics during Respect Life Month. The month offers the opportunity for Catholics to “reflect on the precious gift of life and recommit ourselves to working toward a culture that truly welcomes and protects human life in our society,” the bishops write.

The Texas Catholic Conference of Bishops is the association of the Roman Catholic bishops of Texas. Through the TCCB, the bishops provide a moral and social public policy voice that includes monitoring all legislation pertaining to Catholic moral and social teaching; accredit the state's Catholic schools; and maintain records that reflect the work and the history of the Catholic Church in Texas.

Mark Robertson is scheduled to be executed in Texas on Thursday, April 11, 2019 for the 1989 murder of 81-year old Edna Brau. Mr. Robertson was sentenced to death by a jury through a procedure  deemed unconstitutional by the Supreme Court for its exclusion of the mitigating evidence that Mr. Robertson had an abusive father and a history of drug use. Though the Supreme Court vacated Mr.

On February 28, 2019, Billie Wayne Coble is scheduled to be executed in Texas for the murders of Zelda, Robert, and Sergeant Bobby Vicha in 1989. Catholic Mobilizing Network calls on all people of goodwill to oppose this action.

On January 30, 2019, Robert Jennings is scheduled to be executed in Texas. Catholic Mobilizing Network calls on all people of goodwill to oppose this action.

From governors races to ballot measures, Americans harnessed the power of their voices and their votes in the 2018 Midterms to work toward a more restorative criminal justice system. Here are just a few of the recent victories that point to an end to the death penalty, which is indeed on the horizon.