Pope Francis condemns the death penalty in visit to Bahrain 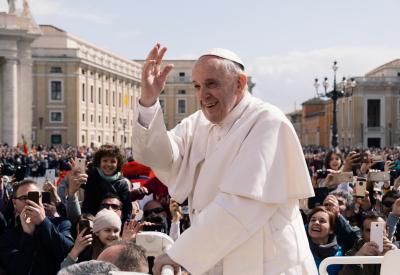 This November, Pope Francis made a historic papal visit to the Kingdom of Bahrain.

During his first formal address to the country, the Holy Father condemned Bahrain’s use of the death penalty, which has increased significantly in the past decade.

Bahrain lifted its temporary execution moratorium in 2017. Since then, the country has executed six individuals, and increased death sentences by 600%.

"I think in the first place of the right to life, of the need to guarantee that right always, including for those being punished, whose lives should not be taken," said Pope Francis.

Following in the footsteps of his predecessors Pope Saint John Paul II and Pope Benedict XVI, Pope Francis has consistently affirmed the death penalty’s place on the continuum of life issues. The Holy Father’s address to Bahrain comes just months after he declared global death penalty abolition as his official prayer intention for the month of September 2022.

CMN Executive Director Krisanne Vaillancourt Murphy responded to the Pope’s statement in Bahrain, saying: “We give thanks for Pope Francis’ commitment to promoting a consistent ethic of life — regardless of the harm someone has caused or suffered.”

Vaillancourt Murphy also placed Bahrain’s death penalty in global context: “Even as a small number of nations like Bahrain continue to execute and condemn their citizens to death, most of the world is moving in the other direction. More than 140 countries have rejected the death penalty either in law or in practice.”

While the United States remains in that select number of countries which retain capital punishment, consistent trends show that the practice is declining nationally. Over each of the past eight years, the U.S. has seen fewer than 30 annual executions — averaging 2.5 executions per month. New death sentences remain near historic lows, illustrating how capital punishment continues to fall out of favor with the American public.