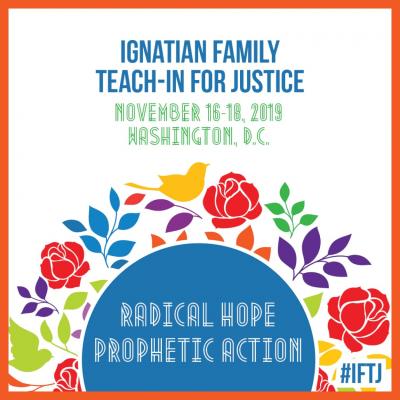 The Ignatian Family Teach-In for Justice (IFTJ) is an annual gathering for members of the Ignatian family (Jesuit institutions and larger church) to come together in the context of social justice and solidarity to learn, reflect, pray, network, and advocate together. It is a place where people are empowered, re-energized, inspired, challenged, and supported by a community that sees faith and justice integrally linked.

CMN will be represented at an IFTJ exhibitor's table, as well as featured in the following events:

Come join Catholic Mobilizing Network for an engaging new documentary about the death penalty. Stay for a short discussion after the film and learn how the Catholic faith calls us to build a restorative criminal justice system that foster a culture of life.

Dewayne Alfred Brown was released from Texas' notorious death row on June 8, 2015. He spent 12 years and sixty-two days in prison for a crime he did not commit. He was released as a result of exculpatory evidence which was withheld from his attorneys. Mr. Brown was declared innocent in the same courtroom he was sentenced to death 12 years prior. Two years ago, Alfred Dewayne Brown and his attorney, Brian Stolarz, spoke at IFTJ. Now the subject of an upcoming Netflix documentary, Dewayne and Brian are back to share important updates on his case and the state of the death penalty in the United States. They will be joined by Catholic Mobilizing Network, the national organization that mobilizes Catholics to end the use of the death penalty and transform the U.S. criminal justice system from punitive to restorative.

Amidst a criminal legal system rooted in punishment, retribution, and slavery, restorative justice proposes a different way - one that transforms relationships by centering the voices, needs, and experiences of those most impacted by harm and violence. Restorative practices, such as peacemaking circles and community conferencing, are gospel centered approaches that are effective in combating mass incarceration and breaking cycles of trauma. Catholic Mobilizing Network's recently released faith formation guide invites readers to discern this radical, yet age old, approach to justice and its implications for ministry systemic change, and our everyday lives. Participants will come away with a deeper understanding of the theological and practical elements of the Catholic call to restorative justice.