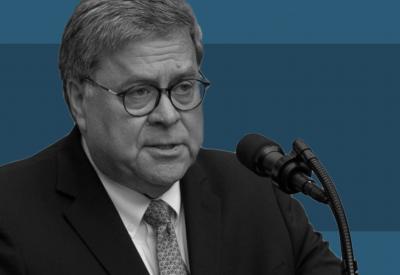 (Washington, DC) Hours after authorizing the federal government’s execution of William LeCroy — an express violation of Catholic teaching — Attorney General William Barr is set to receive the Christifideles Laici award Wednesday from an independent organization identified as the “National Catholic Prayer Breakfast.” Mr. LeCroy’s execution marked the sixth lethal injection carried out by the federal government since AG Barr’s Department of Justice resumed the practice in July after a 17-year hiatus. Mr. Barr is expected to advance a seventh execution on the day following the breakfast.

“With this award for Mr. Barr, the ‘National Catholic Prayer Breakfast’ has become a twisted halftime show between executions, and could mislead the public to believe the Catholic Church somehow condones the death penalty. This is categorically false,” stated Krisanne Vaillancourt Murphy, Executive Director of Catholic Mobilizing Network.

“On the contrary,” Vaillancourt Murphy added, “the Church is unequivocal in its opposition to capital punishment because it is a violation of the dignity of the human person. The fact that Mr. Barr has led the the federal government’s relentless push to resume executions should preclude him from receiving any award said to honor ‘those who serve the Church so well.’”

In the days and weeks leading up to the breakfast, Catholic opposition to A.G. Barr’s award has steadily mounted. More than 6,000 individuals have signed CMN’s National Catholic Petition Against Federal Executions urging Mr. Barr to reverse course on executions and signaling to "National Catholic Prayer Breakfast" organizers that it is unacceptable to reward Mr. Barr’s flagrant disregard for the Church’s anti-death penalty teachings.

Also on September 22, the eve of the breakfast, the United States Conference of Catholic Bishops released its fourth public statement against the resumption of federal executions. “We say to President Trump and Attorney General Barr: Enough. Stop these executions,” the statement reads. On September 18, the Archdiocese of Santa Fe released a statement calling for a withdrawal of the award to AG Barr.

CMN’s upcoming federal execution vigil for Christopher Vialva on September 24 will include Cardinal Daniel N. Dinardo of Galveston-Houston and Archbishop Wilton D. Gregory of Washington. Previous vigils included Archbishop Joseph F. Naumann of Kansas City, Chairman of the USCCB Committee for Pro-Life Activities, who is also the son of a murder victim.

“Mr. Barr had the authority to stop the execution of Mr. LeCroy, as well as the deaths of five men before him. Repeatedly, he has declined to do so,” said Vaillancourt Murphy. “Under his leadership, the Department of Justice has carried out more executions in 2020 than in any other comparable time in the past 70 years. Nothing about this is pro-life.”