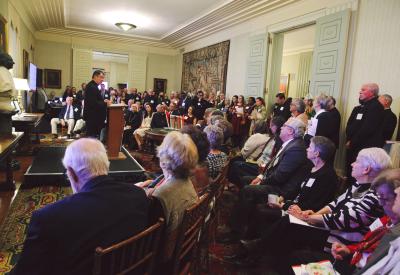 (Washington, D.C.) Catholic Mobilizing Network (CMN) announced the formation of a new national Advisory Council last night at its Justice Reimagined Awards & Celebration at the Apostolic Nunciature of the Holy See in Washington, DC on the annual World Day Against the Death Penalty. Comprised of members whose expertise spans the legal profession, restorative justice practice, ecumenical advocacy, and Catholic education and ministry, as well as those who have been directly impacted by the system of capital punishment, the council will give guidance and support to CMN in its national, faith-based efforts to end the death penalty and promote restorative justice.

CMN’s Advisory Council was inspired in part by the Catholic Church’s ongoing Synod on Synodality, which was announced by Pope Francis in 2021. The global synod invites all people of goodwill to listen and dialogue in a spirit of discernment as a way to more deeply encounter the larger community of the People of God.

“The Advisory Council is CMN’s way of embracing the synod’s invitation to encounter and learn from those with new perspectives and diverse backgrounds,” said CMN executive director Krisanne Vaillancourt Murphy. “We believe that assembling this incredible group of national leaders will expand and enrich CMN’s unique work to transform our broken criminal legal system from punitive to restorative.”

In addition to launching the Advisory Council at last night’s event, CMN also presented awards to Cardinal Wilton Gregory, Archbishop of Washington, and Vicki and Syl Schieber for their visionary Catholic witness against capital punishment in the United States. To learn more, visit the event press release and online photo gallery.