A Reflection for the Fourth Sunday in Lent 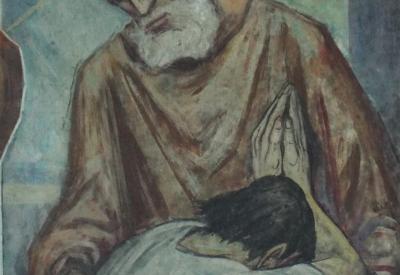 Lent Is the Time to Return and Stay

In the story of the Parable of the Prodigal Son, Jesus responds to the sneering of the Pharisees: “This man welcomes sinners and eats with them.” He begins telling the story of a man who has two sons. The youngest son asks his father to give him his share of the family estate as an anticipated inheritance. Once received, he immediately embarks on a long journey to a faraway land, and the Gospel tells us “there he squandered his property in dissolute living.”

According to the customs of the time, a son would only receive his inheritance at the time of his father's death. The fact that the younger son instigated this premature division of the family inheritance shows a rebellious indifference and pride that is disrespectful of his father, selfish, and immature. His asking shows a lack of piety, and implies he does not want to know anything about his father.

When he had spent everything, a severe famine took place throughout that country. The son becomes so desperate that he gets a job feeding pigs, which were thought of as filthy animals that Jews were not even allowed to touch. This reveals to us that he had fallen very low. The son represents a person who lives in rebellion with God.

Finally, the young man comes to his senses, remembering his father. With humility, he recognizes his foolishness, and decides to return to his father to ask for forgiveness and mercy. The father, who had been watching and waiting, receives his son with open arms. Overjoyed, the father immediately addresses his servants and asks them to prepare a feast in celebration of his son's return.

The father is an image of the Heavenly Father, who waits patiently with loving compassion to restore us when we return to Him with a humble heart. His mercy is infinite; He offers us everything that is in His kingdom, without looking at our past.

Meanwhile, the eldest son feels the celebration is unfair. The father tries to dissuade the older brother from his jealous attack by explaining: "My son, you are here with me always; everything I have is yours.” We see that the eldest son is clearly an image of the Pharisees (but could also be us at times). In their own righteousness they have forgotten to rejoice when a sinner returns to God. The bitterness and resentment of the eldest son keeps him from forgiving his younger brother and prevents him from seeing the treasure that is a constant relationship with the father.

The message of today's Gospel agrees with a theme repeated throughout this Lenten season: we have a merciful Father who forgives our mistakes and malice.

The well-known parable of the prodigal son reveals the impudence and sin of the beloved son, who only decided to return to the father when He reached the extreme of indigence. Nevertheless, the father waited for him every day, welcomed him with a hug and a feast without even letting him say his speech of repentance, because the gesture of returning was clear enough. It is always time to return. The best thing we can do this Lent... is to return and stay.

Julio manages the Restorative Justice Ministry at the Archdiocese of San Francisco.. He is also the President and Founder of Comunidad San Dimas, a non-profit focused on the rehabilitation, mentorship, scholarships, and spiritual care for juveniles incarcerated, in probation, or parole.