Third Week of Lent: When We Cause Harm

As Jesus drove the money changers from the Temple, his words were clear: “Stop making my father’s house a marketplace.” The temple was to be a place of worship — and nothing less.

When a person is harmed, we too must say “stop.” In a spirit of truth-telling, we must name the harm done and seek ways to restore the one harmed. In Fratelli Tutti, Pope Francis suggests a step in that direction:

“Truth, in fact, is an inseparable companion of justice and mercy. All three together are essential to building peace; each, moreover, prevents the other from being altered...

Truth should not lead to revenge, but rather to reconciliation and forgiveness. Truth means telling families torn apart by pain what happened to their missing relatives. Truth means confessing what happened to minors recruited by cruel and violent people. Truth means recognizing the pain of women who are victims of violence and abuse... Every act of violence committed against a human being is a wound in humanity’s flesh; every violent death diminishes us as people...

Violence leads to more violence, hatred to more hatred, death to more death. We must break this cycle which seems inescapable.” (Fratelli Tutti 211)

We invite you to view the video below from restorative justice organization Bridges to Life for a poignant example of truth-telling.

Like Catholic Social Teaching, restorative justice recognizes that rights and responsibilities are interwoven and, when harm is in need of repair, asks, “whose obligations are these?”

We are created to live with others in dignity and decency; living justly in community requires being accountable for how our choices and actions affect other people. From this perspective, accountability can take many different forms: taking responsibility, asking for forgiveness, returning or replacing material items, making a commitment to changing behavior, etc. In a restorative process, ways of making amends can be mutually determined by those involved, rather than solely imposed by the criminal legal system.

In many cases, if someone causes harm, in one way or another, his or her basic needs were not being met. Perhaps there was a material need for money or food, although often actions are motivated by deeper needs for a sense of protection, identity, inclusion or power. In addition, someone may be acting out of hurt because her or his own dignity or rights were violated.

Lord, I am a broken person. I have sinned, against you and against others. My actions have consequences beyond what I can fully know, and beyond what I may feel able to admit in this moment. Help me to take responsibility for my actions. As I recall the past and look to the future, give me the courage to seek forgiveness from those I have harmed. When confronted with the pain I have caused others, help me to listen with humility and do what I can to make it right again. In my brokenness, give me courage to encounter others who have caused harm with compassion and seek justice and mercy in the path to redemption. 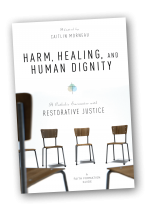 Restorative Justice in Light of the Lenten Gospels is a weekly Lenten series that follows along with Catholic Mobilizing Network's faith formation guide, Harm, Healing, and Human Dignity: A Catholic Encounter with Restorative Justice (Liturgical Press, 2019).

Use code CMNLENT for a 10% discount

First Week of Lent: When We Think About Justice

Second Week of Lent: When We Experience Harm

How can we follow Christ's call to reconciliation without ignoring our needs for healing?

Fourth Week of Lent: When We Consider Communities, Systems and Structures

How do we heal the harms done to the communities and systems around us?

Fifth Week of Lent: When We Become Agents of Restoration

As we are transformed and restored, how can assist in the transformation and restoration of others?

Restorative Justice in Light of the Lenten Gospels: A Five-Week Exploration

A five-part series guiding small groups and individual believers through a Lenten exploration of restorative justice.