I was eleven years old when my dad was shot and killed during the robbery of our family business. The person who committed the crime was found immediately, and was tried, found guilty, and sentenced to death.

I have spent the last twenty-eight years trying to work through the complicated issues raised by this event. First, I had to process what it meant to grow up without my dad. As anyone who has lost a loved one knows, this means that every happy occasion is always marked as bittersweet in the absence of someone who should have been there.

Placing that aside, I had another issue to contend with: I am Catholic, and the Church does not support the death penalty. I have a deep love for the Church, and in many ways, it was the Church, especially my parish, that provided me with healing after my dad was killed; my conscience was troubled by the contradiction I faced.

Two things helped me understand that I am against the death penalty. As a young adult, I watched the movie The Green Mile. There is a scene in the film that involves an execution of someone on death row, and the victim’s family was present and cheering. At that moment, I was disgusted. I realized I could never watch the execution of the man who had killed my dad, never mind cheer it on.

Shortly after watching the film, I met Sr. Helen Prejean. I explained to her that I thought I was against the death penalty, by wasn’t really sure what the alternative was. My family had been told by the District Attorney that he was pursuing the death penalty because “the only way to be sure the man who had killed your father would never be released from prison was to execute him.”

Sr. Helen then told me something that changed me. She said that statement simply isn’t true; she emphasized that life in prison without parole is an equally effective means of the protection of society. In 2018, Pope Francis echoed those words with the modification to the Catechism, “Lastly, more effective systems of detention have been developed, which ensure the due protection of citizens but, at the same time, do not definitively deprive the guilty of the possibility of redemption” (CCC #2267).

The more I teach, the more I begin to see these as factors in my own case. My dad was killed by an African American man, and certainly not a wealthy one. What if he had been killed by a white man? Would the death penalty still have been issued? What if the judge who decided the case had been African American instead of white? Would life in prison without parole have been considered a sufficient sentence? These are questions that I share with my students about my own experience, and certainly deserve further reflection in light of recent events surrounding race and justice in our country.

High school students know a hypocrite when they see one; teaching without authenticity makes no impact on students. I share my story with students so they can understand that as Catholics, we are not only asked to embrace the teachings of the Church that are easy, but also those that are difficult.

One day, a student shared a prayer that she wrote about the death penalty, and invited us to pray for everyone who is on death row. In my case, “everyone on death row” had a very specific name and face. I was being asked to pray for the man who had killed my father. This student had unknowingly asked me to do something I had never before considered – praying for the man who had taken my father’s life. I am not sure that she really understood how much she had challenged me to authentically put my faith into action in that moment.

Recently, the governor declared a moratorium on executions in my state; I can finally stop thinking about whether or not this man will be executed. My conscience, for the moment, is at rest. 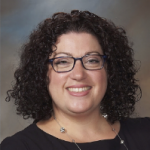 Melissa Ursin is the Religious Studies Department Chair at Presentation High School in San Jose, California. She is a graduate of Loyola Marymount University, and holds a Masters Degree in Theological Studies from the University of Notre Dame.

They killed her husband. Her mercy saved their lives.

The great-grandson of a murder victim reflects on his great-grandmother's quiet holiness and mercy.