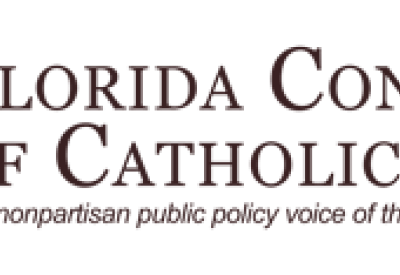 The Florida Bishops in 2013 co-wrote a strongly worded letter to the Governor pleading with him to both commute an imminent death sentence and to also end the use of the death penalty in Florida. A portion of their letter says:

"We urge Governor Scott to commute the death sentence of Marshall Gore to life in prison without possibility of parole.

In making this plea, we are saddened and troubled by the brutal murders of his victims, Susan Roark and Robyn Novick, and we express our sincere sympathy to their families. However, neither retribution nor deterrence can justify the use of the death penalty.

Society must be protected; criminals must be punished, but we must stop killing to show that killing is wrong. We must seek justice without vengeance. Some believe the death penalty will bring closure, but most often this is not the case. Only forgiveness frees one to live again in peace, removing the desire for revenge.

We renew our appeal to the Governor and all policymakers that when society can otherwise be kept safe, there is no justifiable reason to use the death penalty. Across the world, most other countries have abandoned the death penalty, in practice or in principle. In our country, the past six years have seen six states repeal their death penalty laws. Given our dubious record of wrongful convictions with twenty-four exonerations, Florida should join these enlightened states.

Governor, please commute this death sentence. We urge you to do all in your power to end the use of the death penalty in our state."