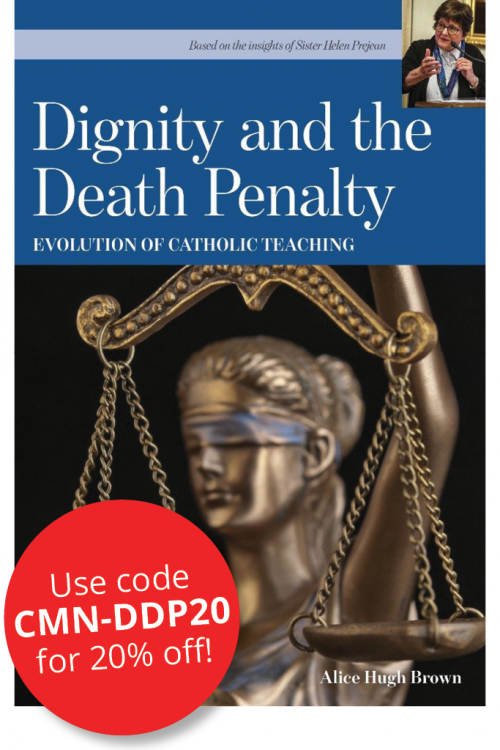 (Washington, D.C.) Catholic Mobilizing Network is proud to announce the publication of Dignity and the Death Penalty: Evolution of Catholic Teaching, a small-group resource created in partnership with RENEW International and based on the insights of Sister Helen Prejean, CSJ, a leading advocate for abolishing the death penalty. Sister Helen’s 1993 book, Dead Man Walking, and the 1995 award-winning movie by the same title, changed the way many people viewed capital punishment.

“We are thrilled to be able to share this timely and engaging new resource for Catholics looking to deepen their understanding of how capital punishment violates the sanctity of human life,” said Krisanne Vaillancourt Murphy, executive director of CMN. “We are eager to see how the rich discussions and personal reflections sparked by Dignity and the Death Penalty translate into meaningful conversion and concrete action in the lives of Catholics nationwide.”

In the span of seven small-group sessions, Dignity and the Death Penalty employs Catholic Church teaching, current statistics, and testimony from people directly impacted by the death penalty to prompt in-depth discussion around the brokenness of the criminal legal system and life-affirming alternatives to capital punishment.

“I was thrilled when Sister Helen approached us about creating this resource,” said RENEW president and executive director Sister Terry Rickard, O.P. “She has done such amazing work speaking out to change hearts about capital punishment, and we were honored that she entrusted us bring her wisdom to small-group faith sharing around the country. We sincerely hope that it will help transform hearts and move Catholics to be engaged in advocacy to end the death penalty and in other pro-life issues.”

Dignity and the Death Penalty arrives at a pivotal moment in the death penalty abolition movement as executions and death sentencing rates are on the decline. Public opposition to capital punishment is at a record high, and a 2018 revision to the Catechism of the Catholic Church which called the death penalty “inadmissible” has brought this issue to the forefront for all Catholics. Engaging the advocacy of parishioners around the country could have a huge impact on the movement to end state-sponsored executions.

In addition to the faith-sharing resource, a series of videos related to each session, featuring Sr. Helen, will be available online for anyone who seeks to understand more about the death penalty in the U.S. Production of videos associated with this resource were funded in part by the Catholic Communication Campaign of the U.S. Conference of Catholic Bishops.

To learn more about Dignity and the Death Penalty: Evolution of Catholic Teaching, please visit: catholicsmobilizing.org/dignity-and-death-penalty

Catholic Mobilizing Network is a national organization that mobilizes Catholics and all people of good will to value life over death, to end the use of the death penalty, to transform the U.S. criminal justice system from punitive to restorative, and to build capacity in U.S. society to engage in restorative practices. Through education, advocacy, and prayer, and based on the Gospel value that every human is created in the image and likeness of God, CMN expresses the fundamental belief that all those who have caused or been impacted by crime should be treated with dignity. Visit catholicmobilizing.org for more information.

The mission of RENEW International is to renew personal faith and parish life—unlocking the power of small groups by equipping laity and clergy to share their Catholic faith and live it every day. For more than 40 years, RENEW International has touched the lives of 25 million people; made an impact in 24 countries on six continents and in almost 170 dioceses in the United States; developed over 400 books and other resources, including large-print editions; and made its resources and materials available in more than 40 languages and dialects. Visit renewintl.org for more information.