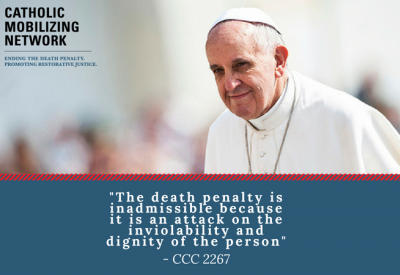 “Today is a capstone teaching moment for the Catholic Church. For people in the pews, it is a challenge to actively build a culture of life by abolishing the death penalty, especially in the 31 states that still have it on the books in this country,” stated Krisanne Vaillancourt Murphy, Executive Director of CMN.

Catholics have been encouraged by Papal and Church authority to seek abolition of the death penalty for over 20 years. When visiting St. Louis in 1999, Pope John Paul II called the death penalty “cruel” and “unnecessary.” The United States Conference of Catholic Bishops launched the Catholic Campaign to End the Use of the Death Penalty in 2005, which ultimately led to the formation of CMN. In 2011, Pope Benedict XVI renewed Pope John Paul II’s appeal to end the death penalty, and in his historic speech before the US Congress in September of 2015, Pope Francis called for a global abolition of capital punishment.

“In addition to papal proclamations, Catholic bishops in every state that has the death penalty have taken stands to see an end to this practice. Today’s action further clarifies any remaining ambiguity about the Church’s teaching against the death penalty and strengthens the global  resolve to bring an end to this practice,” asserted Vaillancourt Murphy.

In the backdrop of today’s announcement, over 2800 people sit on death row in the United States. Fourteen executions are scheduled for the remainder of 2018, including three this month alone. Vaillancourt Murphy added, “These upcoming executions are a stark reminder that the death penalty is active in the United States, and it violates our commitment to the dignity of all life. The death penalty is a failed practice that perpetuates the cycle of violence and disproportionately targets marginalized populations, especially people of color, those living in poverty, and people suffering with mental illness.”

As CMN celebrates this declaration honoring the dignity of all life, it especially holds in prayer all those who have been victims of or impacted by grave harm. Longtime Catholic anti-death penalty advocate Vicki Schieber, whose daughter Shannon was murdered in 1998, rejoiced upon hearing this morning’s news: “I was ecstatic because it is so important that victims’ families have strong support from our faith leaders to end the death penalty. Shannon’s birthday is in six days, and I have no doubt that she is smiling from ear to ear saying, ‘Go Mom! Let’s get it done!’”

This revision affirms that every person, no matter the harm they have suffered or caused, has God-given dignity. May this call from the Catholic Church invigorate efforts to end the death penalty and promote more restorative approaches to harm.

For more information about Catholic Mobilizing Network or to sign the National Catholic Pledge to End the Death Penalty (#Pledge4Mercy), please visit catholicsmobilizing.org.

Catholic Mobilizing Network (CMN), working in close collaboration with United States Conference of Catholic Bishops and as a sponsored ministry of the Congregation of St. Joseph, proclaims the Church’s pro-life teaching and prepares Catholics for informed involvement in the public debate to end the death penalty and promote restorative justice.