Climbing the Mountain to a Restorative Future 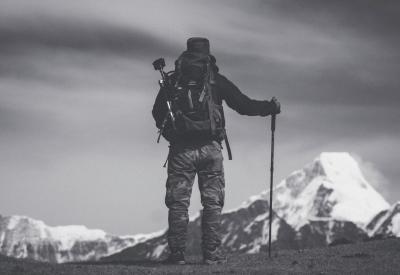 Envision our criminal justice system as a mountain, one of many in the range of systems that influence life and culture in the United States. Nearby peaks represent the economy, education, and healthcare, to name a few. At the base of these mountains is a foundation of racial injustice upon which many of these systems were constructed. From this base begins a pathway through time — a winding road to the top.

I imagine our current criminal justice system as a massive prison-like structure sitting part way up this mountain. It is characterized by unjust policies and practices that give way to mass incarceration and capital punishment. The road leading up to this place includes our country's history of slavery and lynching. (To learn more about this topic, watch the Netflix documentary 13th.) This present reality is a dark and bleak place, but it is not without hope, there is a path forward.

At the top of the mountain is a different way of doing justice, a restorative way, that focuses on repairing harm and transforming relationships impacted by crime. Here, we see the use of practices such as peacemaking circles and victim-offender dialogue that honor human dignity, foster encounter, and heal human connections. From this place, the death penalty is a distant memory and imprisonment is used only as a last resort.

In the present moment, there are any number of steps we can take to move toward that restorative summit. In the image of walking with the two feet of love in action, some of us are called to charitable ministry that provides for the spiritual and material needs of victims of crime and those who are currently or formerly incarcerated. Others step with the foot of justice, advocating for policy changes that reduce incarceration and recidivism, or create more humane conditions for those inside of prison. But in all of this holy and necessary work, the weight of the death penalty is like an anchor holding us down.

The death penalty, in its blatant destruction of human life, is the epitome of punitive practices that disproportionately target the poor and marginalized. Its existence perpetuates a culture of death and dehumanization that pervades criminal justice as we know it. When capital punishment is no longer an option, greater time, resources, and energies can be dedicated to crime prevention and humane treatment of those affected by the criminal justice system. Furthermore, after the death penalty was abolished in Connecticut, numerous additional criminal justice reforms were passed by the legislature.

Following the Vatican’s recent change to the Catechism, Most Rev. Barry C. Knestout, Bishop of Richmond said, “This gives renewed strength to already strong advocacy efforts to push for … the abolition of the death penalty… Further, it speaks to the need to focus our efforts on restorative justice — to fully restore the dignity of those men and women who are incarcerated.” This echoes Pope Francis’ remarks reminding us that beyond ending the death penalty, we must never “deprive the guilty of the possibility of redemption”.

At Catholic Mobilizing Network, we are committed to inviting ever more Catholics and people of goodwill to climb this mountain toward a justice that heals rather than punishes. We can only reach that peak if the anchor of the death penalty is eliminated once and for all.