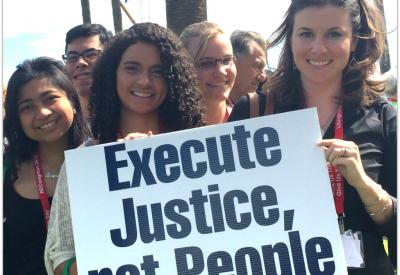 This month I had the pleasure of attending the screenings of two powerful documentaries: True Conviction and In the Executioner's Shadow. Both of these films effectively use the vehicle of personal stories to highlight the moral questions and high-stakes consequence the death penalty forces us to consider. 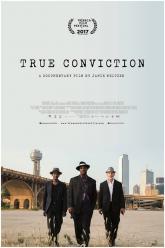 True Conviction chronicles the intertwined story of three Texas death row exonerees--Christopher Scott, Johnnie Lindsey, and Steven Phillips. They form an investigative team and, with new DNA evidence and previously hidden facts, help other people on Texas’ death row with innocence claims get their rightful chance at freedom. Fueled by a desire to not let what almost happened to them happen to others, the three men are steadfast in their devotion to bringing justice to light. The film features several scenes of the unlikely trio seated at a greasy spoon diner sifting through letters begging for their help. While watching this film, one can’t help but wonder the number of people for whom help was too late and were executed despite their innocence.

In the Executioner's Shadow features longtime friend and co-founder of CMN, Vicki Schieber and her husband--Syl Schieber.This documentary asks: what role should the death penalty play in our criminal justice system? The film also 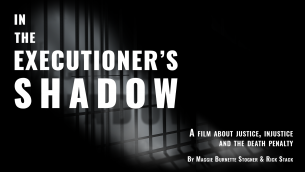 features former Virginia state executioner Jerry Givens, and Karen Brassard--a survivor of the 2013 Boston Marathon Bombing. While the Scheibers have always remained resolute in their decision to not pursue the death penalty for the man who killed their daughter, Brassard grapples with whether or not the man responsible for the Boston Marathon bombing should be sentenced to death. Ultimately, Brassard agrees with the jury’s final decision that the man who placed the bomb receive the death penalty.

In the Executioner’s Shadow shows the range of human response to grave harm and tragedy. Syl and Vicki’s choice to show mercy in the face of the ultimate betrayal is what our Catholic faith calls us to embrace. Concurrently, much of our work to end the death penalty involves walking with people like Karen Brassard who need to be met with compassion and understanding in their journey towards healing and wholeness.

Watching both True Conviction and In the Executioner's Shadow reminded me of just what is at stake in CMN’s mission to end the death penalty and promote a more restorative criminal justice system. I invite everyone to watch these films with an open mind and heart and consider, just as I did, the potential harm experienced by all people at the hands of our current criminal justice system.

To learn more about these films and how you can view them, visit trueconvictionfilm.com and intheexecutionersshadow.com.

The four bishops of Iowa spoke out Tuesday, Feb. 6, 2018 to oppose the death penalty. This statement arrives amid a flurry of legislative action in the Iowa Senate and House that would bring back the state's death penalty, which was abolished in 1965. The bishops - Dubuque Archbishop Michael Jackels, Davenport Bishop Thomas Zinkula, Sioux City Bishop R. Walker Nickless and Des Moines Bishop Richard Pates - issued the following statement through the Iowa Catholic Conference.