A Reflection for Good Friday 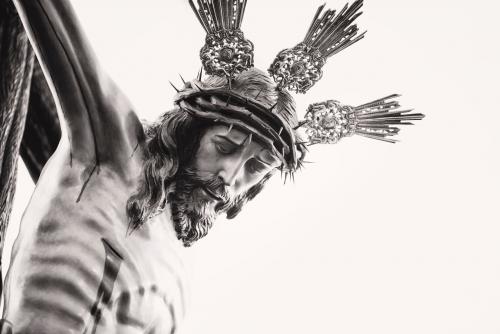 Forgiving When It Feels Impossible

On Good Friday, 2010, I found myself at the Leon County Jail, waiting to visit the man who had shot my daughter — her boyfriend, Conor. Through God’s grace, I had come to forgive him, even though after my visit with him, I would return to the hospital to spend the final hours of Ann’s life with her.

As I walked down the long cement-block corridor, I thought of Jesus, and how on this day, he too had spent the night in prison. What was that night like for him? Had he been allowed to have visitors? How could I even be thinking this? Was I comparing Jesus’ arrest to Conor’s?

But I couldn’t help myself. I thought about how the men, his disciples, had run and hidden. Would the women, perhaps invisible in their social status, have been able to attend to him?

In 2017, my husband and I made a pilgrimage to the Holy Land. We were at Caiaphas’s house, in the very place where Jesus spent the night after his arrest. It was no more than a pit carved out of the stone hillside. I sat on the cold floor and wept, realizing that no one could have come to see him that night.

No one was there to console him. He faced those dark hours utterly alone.

St. Paul tells us that we have a high priest in Jesus who has “been tested in every way.” A Savior who chose to experience a death few of us could imagine. Jesus chose to die under a death penalty, hanging on a cross between two other condemned men, his suffering exposed to all.

Yet, even in that moment of intense suffering, he could pray for those who caused his suffering: “Father, forgive them, for they know not what they do.” (Luke 23:34)

By his example, Jesus calls us to forgive, even in those times when we think forgiveness is impossible. For our family, forgiveness meant pursuing restorative justice in our daughter’s case, so that Conor could serve a meaningful sentence, not merely a punitive one. Ultimately, our conditions of probation, including anger management classes and speaking about teen dating violence, were incorporated into his sentence.

By extending mercy to him, Conor was able to experience God’s love and commit his life to repairing, to the extent possible, the harm he caused. He has already begun to meet those conditions by completing anger management classes and creating public service announcements on teen dating violence. He ministers to other inmates, bringing them the hope that the promise of forgiveness provides.

“So let us confidently approach the throne of grace to receive mercy and to find grace for timely help.” Even on this darkest day, Good Friday, St. Paul reminds us that we are not alone. Jesus will always be there for us to provide the grace needed to do what may seem impossible and in doing so, spread his message of love and mercy to the world.

Kate Grosmaire is the author of Forgiving My Daughter’s Killer – A True Story of Loss, Faith, and Unexpected Grace. She and her husband, Deacon Andy Grosmaire, founded the Ann Grosmaire Be the Change Fund to promote education on forgiveness and restorative justice practices.