Serving as a Face of Mercy on Death Row 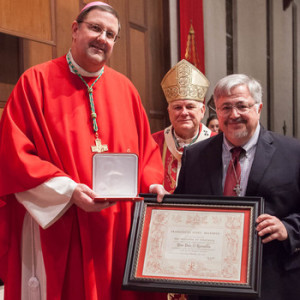 This month, Catholic Mobilizing Network celebrates Dale Recinella, prison chaplain, scholar, and nationally recognized voice on Catholic opposition to the death penalty. At the requests of the Bishops of Florida, Pope Francis recently bestowed the Papal Honor of the Pro Ecclesia et Pontifice Cross upon Mr. Recinella, the highest Papal Honor that a lay person can receive, to recognize Dale’s distinguished service to the Catholic Church. The CMN team interviewed Dale, a regular contributor to CMN’s Mercy and the Dignity of Life podcast, to learn more about his work to build a culture of life in our country. ​​​​​

CMN: You have ministered to the incarcerated, their families, and the families of victims for 17 years. Currently you serve as a chaplain on Florida’s death row. What are the most rewarding and challenging aspects of this ministry?

Dale Recinella: The most rewarding element is the experience of presenting God’s love and mercy as a reality to men who have been told by society that, not only are they not deserving of love and mercy, but they are so despised that we need to dispose of them.

And so, the transforming effect on them of accepting God’s love and mercy also transforms the messenger. Over time, as I convince them, I become myself more and more convinced at constantly deeper levels.

The greatest challenge is the agony of the families on both sides of these horrible crimes. There is the prolonged agony, unnecessarily prolonged because of the death penalty, for the family of the victim who has been dragged through ten, fifteen, twenty or more years of false promises by the state that they will find healing from watching this person be killed. There is also the agony of the family of the condemned person who themselves are in the process of becoming another family of a homicide victim.

The depth of the grief and suffering is beyond words.

CMN: Your work is incredibly demanding. How do you nurture yourself spiritually?

Dale Recinella: We get asked that a lot and the answer is that the abyss of evil is so overwhelming that the only way we have been able to continue long term is to constantly choose to look into the abyss of God’s love. It is the only thing great enough to overcome the darkness. My wife and I hold each other accountable through our spiritual disciplines and the sacraments, especially the Eucharist. We receive very competent and loving spiritual counseling and are sustained by a community of support that holds us in prayer and provides us with spiritual and emotional support.

CMN: You have long been touching hearts and changing minds in your role as a nationally recognized messenger on the issue of the death penalty. What two things would you say to CMN supporters who are seeking to educate family and community members on this issue?

Dale Recinella: The first thing is that the Church’s teaching is consistent with its tradition and we need to be able to enunciate that.

The second thing is that simply based on the facts, the American death penalty will end. It has far outlived any legitimate use or purpose from a social and economic standpoint. The best we can say about the American death penalty is that it is a cruel hoax. When I attended Notre Dame Law School they drilled into us that compassion without competence is a cruel hoax because it raises the hope of healing and recovery in those who are suffering without any ability to provide it.

The American death penalty at best is compassion without competence; it is an incompetent response to the suffering of the families of crime victims. That is the best we can say about it- that it is a cruel hoax.

CMN: Pope Francis has followed his past two predecessors in issuing strong statements regarding the need to end the death penalty. Has the climate surrounding the death penalty issue developed since you began your ministry?

Dale Recinella: Absolutely, for years I wrote articles about never having heard the death penalty mentioned in the Sunday homily at a Catholic church in the United States. In the last couple of months, I have heard homilies at Sunday masses in Catholic churches around the country focusing on the death penalty as a life issue. And I have started to hear prayers of the faithful that include the death penalty with abortion and euthanasia in the petitions. This may sound small, but it is like a small earthquake. There is definitely movement on this issue in the Catholic Church and in American society at large.

CMN: Describe the experience of receiving the Papal Honor of the Pro Ecclesia et Pontifice Cross.

Dale Recinella: I experience it as an honor for the men and women that we serve and the people that serve with me because it is a statement that the least of Christ’s brothers and sisters inside these prisons are in the heart of the Church.