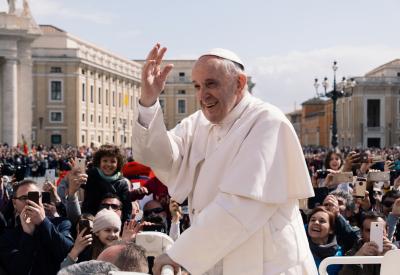 President Joe Biden is set to meet with Pope Francis on Friday, Oct. 29 during his first visit to Rome as U.S. president. Among other pressing issues, many Catholics hope the pontiff and Catholic president will discuss the U.S. death penalty — specifically, the importance of President Biden commuting the sentences of all those on the federal death row.

Earlier this year, Biden’s Department of Justice ordered a temporary moratorium on federal executions following an unprecedented spate of executions by the Trump administration which interrupted a 17-year halt in use of the federal death penalty.

Anti-death penalty advocates saw the action as a positive “first step” toward federal death penalty abolition, though not strong enough on its own to prevent a future execution spree or to eradicate the racial bias and inequity built into the federal death penalty system. Sentence commutations, however, would effectively save the lives of the 45 men awaiting federal execution.

Notably, President Biden is the first sitting president to openly oppose capital punishment and to have campaign on an anti-death penalty platform.

Pope Francis has consistently prioritized death penalty abolition during his papacy. In a 2015 address before the U.S. Congress, he called for a “global abolition of the death penalty.” After multiple public statements echoing the anti-death penalty sentiments of his predecessors, Saint John Paul II and Pope Benedict XVI, in 2018 the pontiff revised the Catholic Catechism to call the death penalty “inadmissible” in all cases. Released in October 2020, the Holy Father’s third encyclical, “Fratelli Tutti,” further cements the anti-death penalty stance, stating that “There can be no stepping back from this position.”

Many Catholics believe that Biden's upcoming visit to Rome offers a special opportunity for Pope Francis to remind the president of their shared goal to end the death penalty and that a personal appeal from Pope Francis to commute the federal death row could go a long way to encourage Biden to uphold the sanctity of life.

Since January 2020, thousands of Catholics have called on President Biden to use his executive authority to commute the sentences of those on the federal death row through a Catholic Mobilizing Network petition. Nearly 10,000 signatures have been collected to date, including those by prominent Catholics such as: Sr. Helen Prejean, CSJ; Most Rev. Joseph Fiorenza, Archbishop Emeritus of Galveston-Houston; Most Rev. Ramon Bejarano, Auxiliary Bishop of San Diego; Most Rev. William Medley, Bishop of Owensboro; Most Rev. Richard Pates, Apostolic Administrator of Crookston; and Most Rev. Oscar Solis, Bishop of Salt Lake City.

The Vatican announced last week that Pope Francis has personally invited heads of state to grant clemency to prisoners this Christmas season.

Find out where your members of Congress stand on the issue of the federal death penalty.