The death penalty was first used in Missouri in 1810 for the crime of murder. From 1810 to 1965, Missouri carried out a total of 285 executions. Hanging was the primary method of execution until 1936, when lethal gas came into use from 1937 until 1987. Starting in 1987, lethal injection was added as an option for inmates in addition to lethal gas.

In 1972, by a 5-4 vote, the U.S. Supreme Court ruled the death penalty, as administered in Georgia, was arbitrary and capricious and thus, cruel and unusual punishment in violation of the Eighth Amendment. This effectively suspended the death penalty nationwide, and in Missouri, from that date until states could revise their laws. Missouri’s new death penalty law became effective in 1975, when Governor Joseph Teasdale signed into immediate effect a new death penalty bill. It was not until 1989 that an execution was performed.

88 people have been executed in Missouri since 1976. One high profile clemency was that of Darrell Mease. Convicted and sentenced to death for the murder of his former drug partner, Lloyd Lawrence, Lawrence’s wife, and Lawrence’s grandson, Mease was scheduled to be executed in 1999. Pope John Paul II was visiting Missouri at the time and made a personal plea to Governor Mel Carnahan to grant Mease mercy. The day before Mease’s execution, Governor Carnahan granted Mease clemency, commuting his sentence to life without parole.

The Missouri Catholic Conference (MCC) is the public policy agency for the Catholic Church in Missouri. The Missouri bishops serve as the MCC Board of Directors. The MCC is actively involved in all levels of government, especially state and federal issues. The MCC promotes the common good by advocating for public policy that upholds the sanctity and dignity of all human life.

Missourians for Alternatives to the Death Penalty 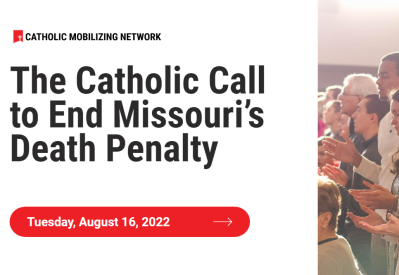