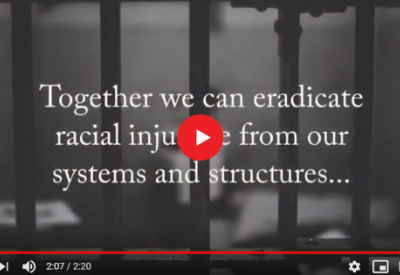 With African Americans incarcerated at five times the rate of white Americans, Catholic Mobilizing Network (CMN) is redoubling its efforts to combat racial injustice in the criminal justice system—including releasing a new video—as part of a commitment to end the death penalty and promote restorative justice.

“Black History Month has been an opportunity to celebrate the profound influence and achievements of our African American brothers and sisters,” said Krisanne Vaillancourt Murphy, Executive Director of CMN. “But this month also has been a reminder of the pressing need for truth-telling about our past and present failings, and for ongoing reform, particularly within our criminal justice system.”

In 2019, African Americans continue to be vastly overrepresented in U.S. prisons and on death row. (Pew Research Center, 2018). Instances of racial bias are still rife throughout our judicial process, including in the case of Keith Tharpe in Georgia.

Almost thirty years ago, Tharpe was sentenced to death, in part by a racist juror who openly questioned “whether black people even have souls.” Having exhausted all his other appeals, Tharpe’s case and his contention of racial bias now rest before the U.S. Supreme Court. On February 17, three Catholic bishops spoke out on Tharpe’s behalf, exhorting the Court to grant him a new sentencing hearing.

To call attention to injustices such as this, CMN is embracing the United States Conference of Catholic Bishops’ (USCCB) recent pastoral letter against racism, Open Wide Our Hearts: The Enduring Call to Love. The letter was the USCCB’s first major anti-racism text in almost 40 years.

In honor of Black History Month, CMN released a brand new video highlighting five key takeaways from the pastoral letter, including the Bishops’ own acknowledgement that Church leaders have historically been “complicit in the evil of racism.” In the span of 2 minutes, the video cuts to the heart of the Catholic call to combat racial injustice, and encourages all people of goodwill to join in the work to “restore right relationships between us.”