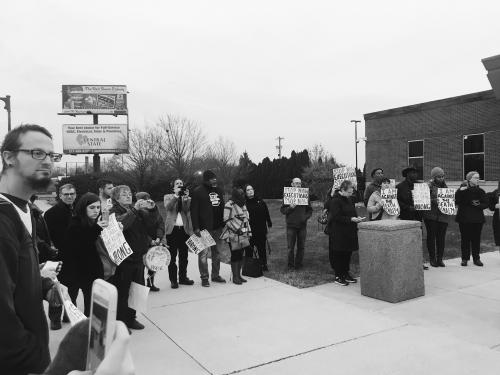 (Washington, DC) A new report released today by the Death Penalty Information Center confirms that death penalty use in the United States remains near historic lows, with fewer than 30 executions in 2019 and fewer than 50 new death sentences for the fifth consecutive year. At this point, half of all U.S. states, accounting for half of the U.S. population (50.4%), do not carry out executions.

Also cited in the report are the results of the November annual Gallup death penalty poll, which show that a higher percentage of Americans now say they oppose capital punishment than at any other time in the modern history of the U.S. death penalty.

“It is encouraging to see the continual decline in the use of the death penalty in the United States,” said Krisanne Vaillancourt Murphy, Executive Director of Catholic Mobilizing Network, the national Catholic organization working to end the death penalty and promote restorative justice.

“As Catholics, we believe in the sanctity of all life, regardless of the harm one might have caused or suffered. These promising trends energize Catholics around the country to put their faith into action and do what Church asks of us — to ‘work with determination’ for the abolition of the death penalty.” (CCC 2267)

In November, three prominent Catholic bishops — Bishop Frank J. Dewane, of Venice and former Chairman of the United States Conference of Catholic Bishops (USCCB) Committee on Domestic Justice and Human Development, Archbishop Paul S. Coakley, of Oklahoma City and Chairman of that Committee, and Archbishop Wilton D. Gregory, of Washington, DC who has written and spoken extensively on life issues including the death penalty — published a high-profile op-ed reaffirming the Church’s unequivocal opposition to capital punishment.

“People in the pews and clergy at the highest levels of Catholic leadership are lifting up the Church’s unconditionally pro-life stance and working to build a criminal legal system that honors the sacredness of human life,” said Vaillancourt Murphy.