Remembering Rita Chairez and her legacy of restorative justice

Originally published on the Discerning Deacons blog on November 2, 2022.

Every year on All Souls Day, each of us carry in our hearts loved ones whose lives and memories we cherish. My own heart aches to have recently lost a dear friend, community leader and Dolores Mission ministry colleague, Rita Chairez. She passed away October 18 at 62.

Mamá Rita, as she was affectionately known by incarcerated people, was a key leader in the Boyle Heights/East LA community for decades. Born in Zacatecas, Mexico, Rita was proud of her heritage and received much strength from her devotion to Our Lady of Guadalupe. She was a key mentor and wisdom guide to me and to many, clergy included, throughout my dozen years in ministry at Dolores Mission.

When the community was traumatized after a 10-year-old girl was killed by a stray bullet while on a scooter in front of her home, Rita helped to lead the community response effort on several fronts. Camino Seguro (Safe Passage) was started through Proyecto Pastoral, and diaconal parish women—immigrant women from Mexico and Central America—wore green shirts and stood outside their homes in the morning and in the afternoons so that children would have safe passage to and from school. Gang members respected the mothers and did not shoot at each other or harass young people if the mothers and grandmothers were outside standing guard in their green shirts. Theirs was an embodied theology of radical presence with the power to thwart possible sparks of violence. The first time I was handed a green shirt and stood outside the church with las señoras during a risky funeral Mass, Rita and others teased me later that my legs hadn’t stopped shaking. I needed the training in faith and fearlessness these mamás offered.

Soon after I began my ministry work at Dolores Mission, a former star high school football player was gunned down at a fourth of July party. We were devastated. His family was active at Dolores Mission Church and School, and Rita and I decided to start a support group for parents who had lost loved ones to violence–Grupo Sobrevivientes. Rita and I facilitated the group for some seven years with monthly gatherings, remembrance Masses, retreats, and a Christmas gathering for their families a couple of weeks before Christmas with food, arts and crafts and games for families. The holidays are a time of missing loved ones, and Rita understood the healing power of decorating a hand-made ornament with your son or daughter’s name on it while others around you did the same.

As the healing in this group progressed, several of the members started visiting incarcerated people in prison. With Rita’s leadership and support through her work with Healing Hearts, Restoring Hope, survivors shared their testimonies and participated in healing dialogues with incarcerated people. Survivors understood that their own healing was bound up in the healing of the offender, and these were grace-filled encounters that took about two years to prepare for. I participated in three of them and marveled at the restorative justice work Rita had engaged in with incarcerated people to prepare them for these encounters with victims/survivors.

One year Rita and I and the Sobrevivientes Group decided to invite families from a neighboring support group for parents with loved ones incarcerated for murder to our Christmas gathering. The gathering started off very awkward despite our planning. People were having a hard time connecting and were choosing to stay just with their family and not interact with others. There was an invisible wall separating families who were spending their weeks visiting gravesites and families spending their weeks visiting prisons. One of the activities was that each family would decorate a gingerbread house. That loosened the atmosphere a bit. And then we discovered that we only had five tubs of icing and that families would have to share the icing among the 20 tables in the school cafeteria. So the little kids in the group started running from table to table looking for icing and thereby looking at one another’s ginger bread houses. And as the little kids started talking and laughing with each other, then the mothers started talking to each other, and then the fathers started talking to one another. Even the teens warmed up to each other. And before we knew it, we had kinship in the room.

These kinds of encounters could happen because Rita—who lost two of her brothers to gang violence—was a huge soul, courageous, tenacious, funny, visionary, and believed that the long road to reconciliation, forgiveness and healing was a road worth constructing. En paz descanse mi querida amiga.

In 2016, Catholic Mobilizing Network gathered people from across California who opposed the death penalty to share their testimony ahead of the state's vote on Proposition 62, which would repeal the state's death penalty. Rita Chairez was one of these voices. We are grateful for her witness. 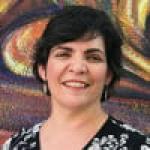 Ellie Hidalgo is the Co-Director of Discerning Deacons, an organization whose mission is to engage Catholics in the active discernment of our Church about women and the diaconate. Previously, she served for 12 years as the pastoral associate and previously as a pastoral assistant for Dolores Mission Catholic Church and School, a Jesuit parish in the Latin American immigrant community of Boyle Heights, just east of downtown Los Angeles, California. This small church with a giant heart is known for its restorative justice ministries and faith-based community organizing, and for being the home parish of Homeboy Industries.