Through Doldrum and Tempest: A Reflection for Palm Sunday

On Palm Sunday, the Church invites you to let the substance of the Gospel fill your most secret sanctuary so that the weight of God’s love for you might ballast the ship of your faith in rough seas and keep it faithfully on course.

Through Isaiah’s song, in today’s First Reading, God hopes to rouse a despondent and weary Israel whose defeat and exile at the hands of Babylonian captors left Israel lost and unsure of its identity as a people, a nation, and a faith — that is, unsure of its relationship to God.

In Isaiah 49, Zion cries, “The Lord has forsaken me; my Lord has forgotten me!” but the prophet sings “Can a mother forget her infant...?” It is Israel, not the Lord, who wandered and strayed.

Rousing Israel from the lethargy of defeat demands a faithful prophet willing to take the helm and navigate through doldrum and tempest.

At the hands of enemies who scorn and despise him, the suffering psalmist declares, “I am a worm, not a man” (Psalm 22:7). Feeling alone and barely human, he cries, “Eloi, Eloi, lema sabachthani?” — “My God, my God, why have you abandoned me?” (Psalm 22:2) — an echo of Zion’s initial response to Isaiah’s prophetic message.

Unlike Israel and Zion, however, the suffering psalmist invites the Lord into his tribulation. “They scoff at me… they mock me… many dogs surround me… a pack of evildoers closes in upon me… But you, O Lord, be not far from me; O my help, hasten to aid me” (Psalm 22:20).

And so, the persecutors’ plan backfires, for the psalmist’s inward turn leads him past the false sense of isolation and dehumanization they sought to inflict and moves his heart toward that inner space where he can call upon his surest help, his ballast in rough seas.

Would that those who lined Jesus’ path with cloaks, palms, and shouts of “Hosanna!” were as true as Isaiah and the suffering psalmist. Would that she who anointed Jesus with perfume from the alabaster jar in today’s Gospel had anointed them, Judas Iscariot, and Peter too — it might have calmed them.

Alas, the storm of Christ’s passion would leave them all flailing (though Peter would regain his bearings soon enough).

And in the calm before the storm, Jesus went to Gethsemane to pray with Peter, James, and John for company. And when he turned to them and said, “My soul is sorrowful even to death,” they could not keep the watch (Mark 14:34).

And when the Lord could sense the pack of dogs and evildoers closing in upon him, when the to and fro of prayer disoriented him, and when a sense of exile came upon him and Gethsemane heard words like “take this cup away from me,” Jesus too turned toward his secret core and heard his Abba say “can a Father forget his son?” then cried “not what I will but what you will” be done! (See Mark 14:36) 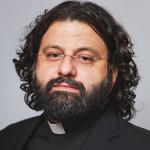 Fr. Ricardo Avila serves the Roman Catholic Church as a member of the Society of Jesus (USA East Province) and a priest. He joined Catholic Mobilizing Network’s Board of Directors in 2021. Fr. Avila is currently missioned to be a Visiting Fellow and Scholar with the Georgetown University Health Justice Alliance and provides free legal services to Washington Cancer Institute patients as a staff attorney with the Cancer Legal Assistance and Wellbeing Project.